I found the Twisty Sisters Rally information from the T.W.O. Website.

As I read through the Twisty Sister's website I saw there were going to be seminars and clinics and I thought it would be a perfect way to meet other women who ride.

I got excited until I looked closer and realized the events and seminars were from the previous years Rally.

The event this year is going to be a reunion rather than a rally.
No rally fees, no seminars; just fun, fellowship, and riding on some wonderful roads!

The weekend still sounded like fun, so I decided to give it a try. I posted on several of the forums that I visit (cough, cough) but no one decided to come with me.

I asked if it was a Woman only weekend, and they said there would be Men there as in husbands/boyfriends/brothers. They said guys would come in handy for beer runs or loading bikes, but I really got the vibe that it was primarily a chance for the girls to get together and ride.

No single Men were going to be tolerated without a Twisty Sister invite!

Originally Bill decided to come, but he bailed because he had too much work to do, so I went alone.

The only "problem" I had was what bike to take.

I decided to take the KLX because I would be returning to T.W.O. in three weeks, and then I'd have one of my Sport Bikes for the ZZR Rally.

I wanted to explore some of the fire roads around the Suches/Chattahoochee area and this was a perfect opportunity to do so,and of course meet new folks!.

The Twisty Sister rally was based out of the T.W.O. campground and I was going to take Friday and Saturday to explore, so I headed up Thursday so I would have two full days of riding.

Originally I thought there were going to be more women showing up Thursday night, but that didn't happen.

As it turned out, there was one other woman who showed up on Thursday night, and she was on an Interceptor (Thanks for the company Angela!).

Thursday night, Angela and I had dinner in Dahlonega at a place called "The Smith House" Restaurant.

After dinner in Dahlonega, we got back to a pretty creepy place around T.W.O. because we (and two other people) were the only folks camping.

I had the meadow just over the bridge at T.W.O. to myself.

As I lay in my sleeping bag Thursday night, feeling a little scared, I kept thinking about Friday exploring the woods, alone, but Saturday I would have company.

No critters came to the campsite during the night, so I slept pretty well after my "first night" jitters went away.

Friday morning I woke up, saw some early folks getting to T.W.O. and found Angela getting ready. I talked to Angela and said that since I was going to be alone for the day, I showed her the map and the area I was going to explore.

I said that if I didn't show up that evening, to have a search party go and look for me.

I was going to take it easy, and I have all the tools and supplies I would need in case I broke down.

Friday was amazing as I explored by myself.

Friday afternoon many women arrived and there were plenty of folks around and camping.

I'm grateful for the folks camping on Friday as Friday night was a terrifying ordeal because a Beast (Coyote/Wolf/Bigfoot/Werewolf) decided to come to the campsite and make noise like something out of a horror movie.

At around 4:00am, when all the crickets, bugs and frogs stopped making their noise, a single piercing cry came out of the silence at the edge of the campsite.

The single cry like no other; not a dog, not a bear, not a cat, not a scream but a wail....something primal and ghastly that could make a single volumous note instantly loud without a ramp up, followed by some trampling and growling as the beast was looking around.

I waited for the silhouette, so I could judge how close to the tent (and death) I'd be if the beast decided to take an interest in me.

Damn the chocolate, oranges and trail mix I had near the tent opening.

I only hoped the beast didn't get a fix on the easy meal inside the tent!

I was frozen in my tent. I didn't want to attempt to open a zipper and make a run for it.

All I could do was wait and listen.

The beast worked it's way through the campsite for several minutes and then proceeded to the farm down the valley a bit.

Once there, a huge fight ensued with the dogs of the farm.

Yelps and screams could be heard. I was glad something there was more appetizing than something here.

After a few yelps and screams from the farm, some time passed and the beast decided to come through the campsite again.

Either the beast didn't get anything to eat at the farm or was just passing through, I just hoped my luck would still hold out.

Terrified, I did my best "Mammal-cower-silently-so-the-beast-eats-the-other-mammals-first".

I heard the beast moving around, but staying farther away from my tent this time around.

My "Cower Technique" worked as the last I heard of the beast, was off in the distance doing it's wail.

Friday night was interesting, Saturday morning, I learned that I was not the only one who was terrified of our visitor during the night!

On Saturday I had the company of JoAnna and Laura who were AMAZING riders.

As it turned out, JoAnna has her own motorcycle instruction company and Laura is a veteran of years and years of riding along with many track days!!!

We had a blast riding together and they "Saved" the weekend for me.

We had lunch in a little general store where I almost had to wash dishes because I took out the plastic to pay for what I ate.

Good thing I had some money on me.

My Take on the Weekend

The Rally had plenty of women there, although there were very few Sport bikes there.

The demographics of the women in attendance was all over the board - CEOs', Professionals, Healthcare, housewife, etc etc.

Most of the women had Cruisers with a spattering of Adventure bikes.
If I had taken a Sport Bike I would have been alone or would have ridden with Angela.

Angela is a Motorcycle instructor and I have no doubt that I would have learned a few things from her, so maybe I should take a Dual Sport and a Sport Bike next year.

You could tell that some of the women attended this rally many times before and knew each other very well. I had a great time even though it was my first time there.

I don't understand why more women didn't show up for something like this.

Since there were few men there, it was a great "Girls Vibe" around the campfire.

All the women got to talk about Motorcycles without a guy dominating the conversation.

What a missed opportunity for Women who stayed away and who need to pick up skills from women who actually teach people how to ride motorcycles?!

The Smith House Restaurant (not my image) 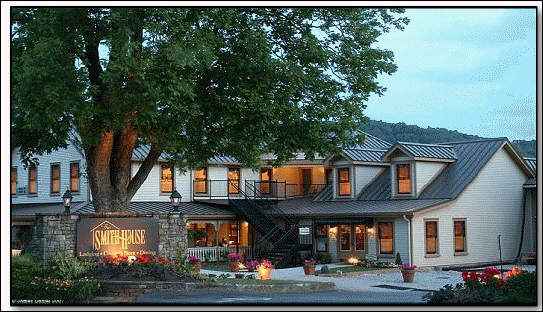 The Morning on Friday 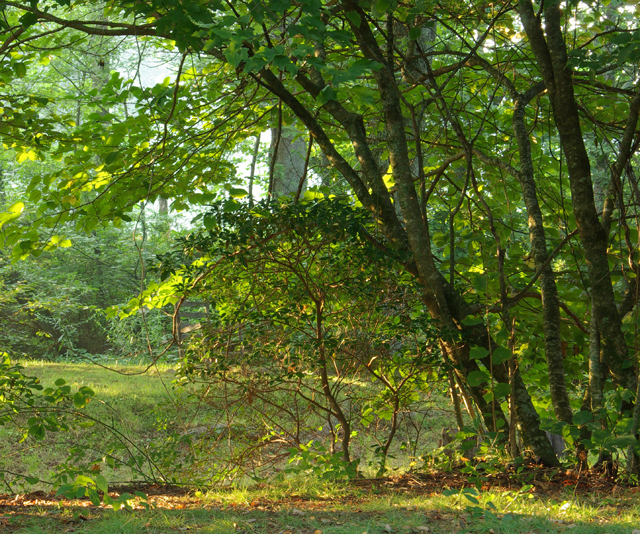 Fire Roads that don't have Sand! 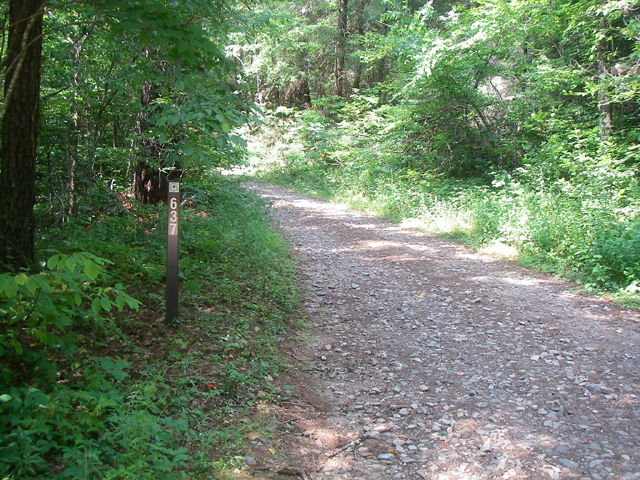 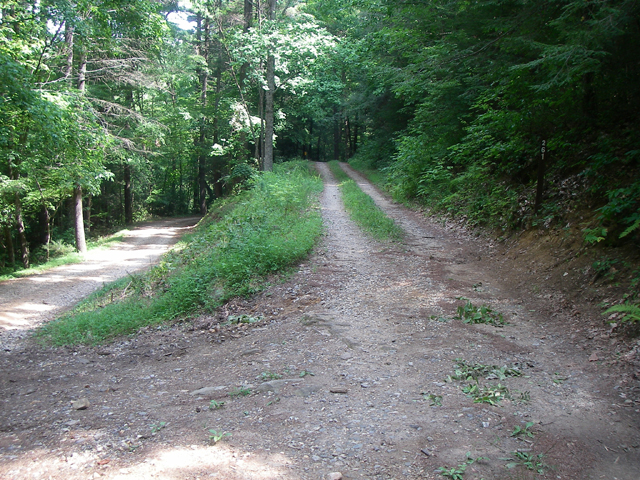 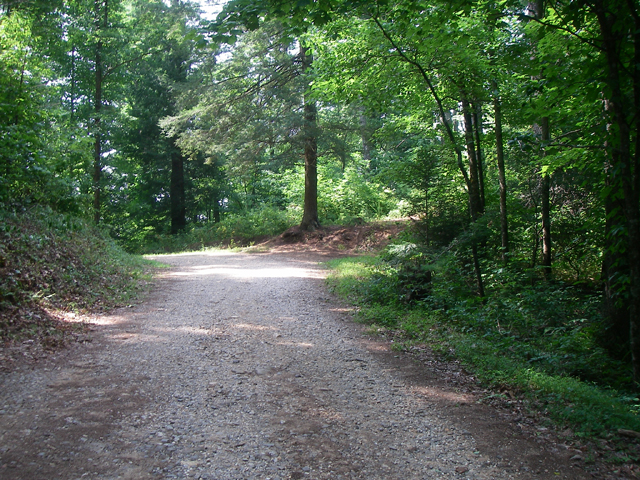 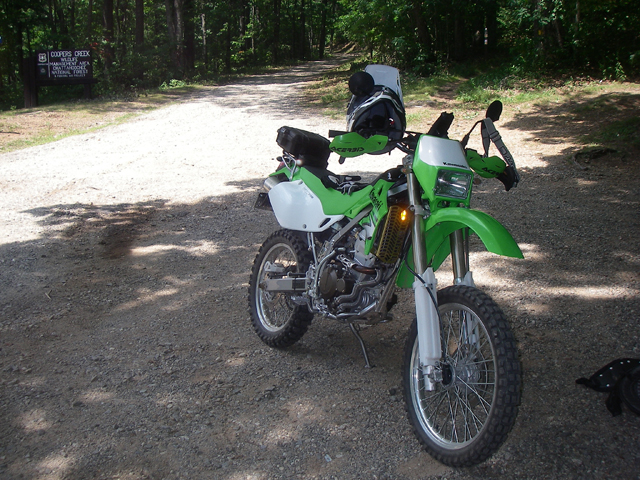 A cool angle of the KLX 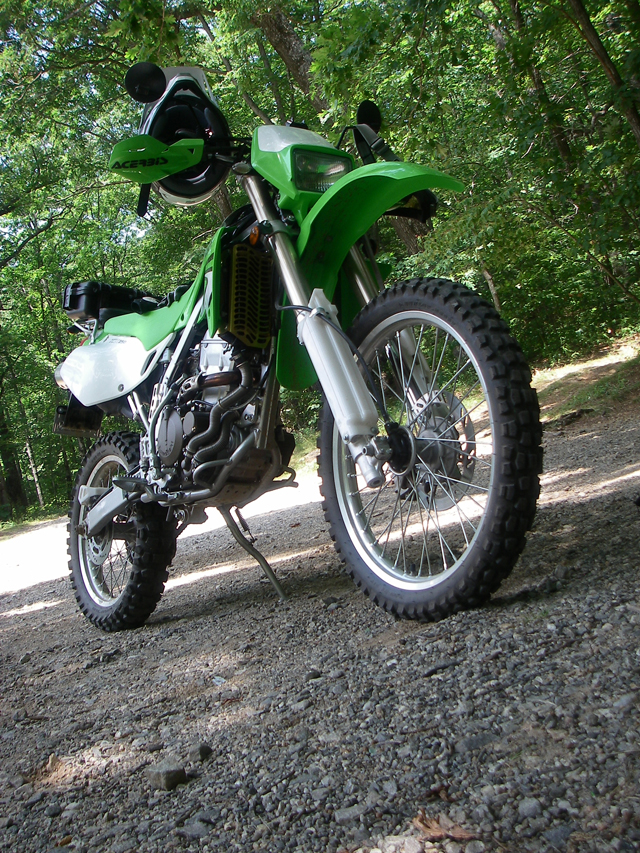 A Twisty Sister taking a run down WolfPen Gap 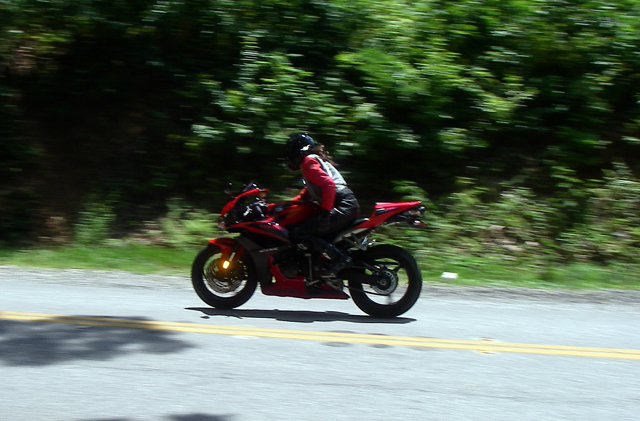 Laura in the distance on her Transalp 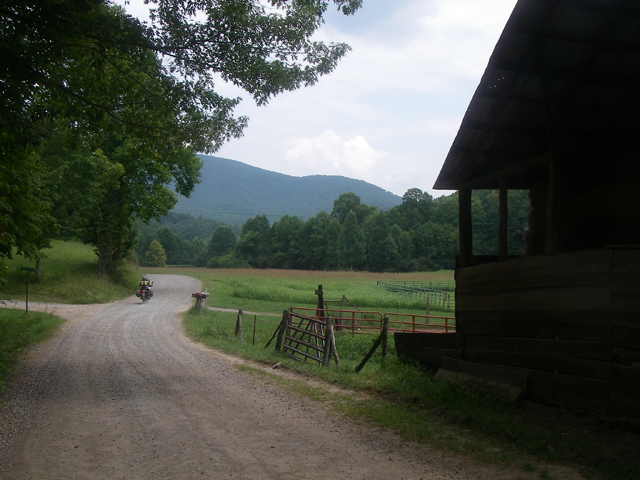 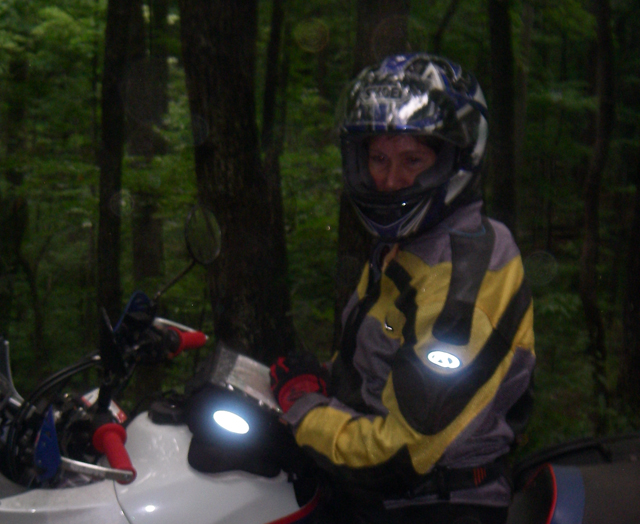 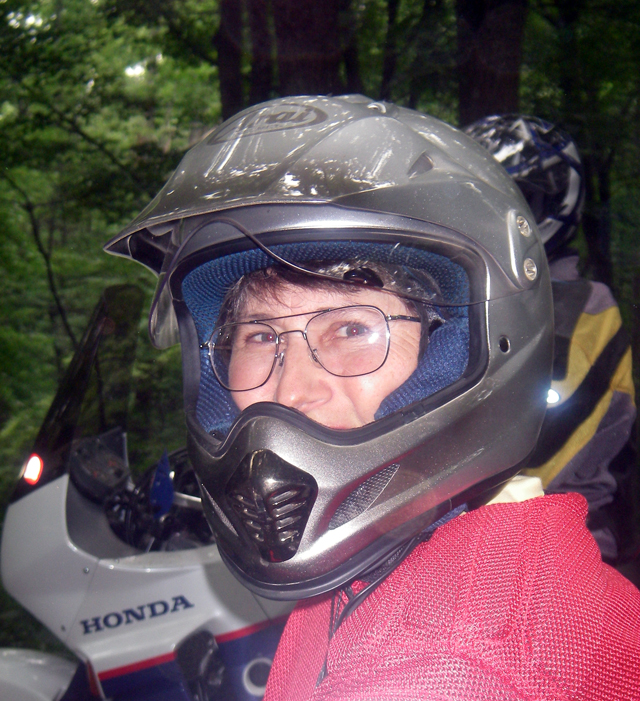 Here are the .kml files for the two days that I rode in the Mountains around Suches. Using Google Earth, and the open utility, you can see our actual paths!

The image below show the routes I took. 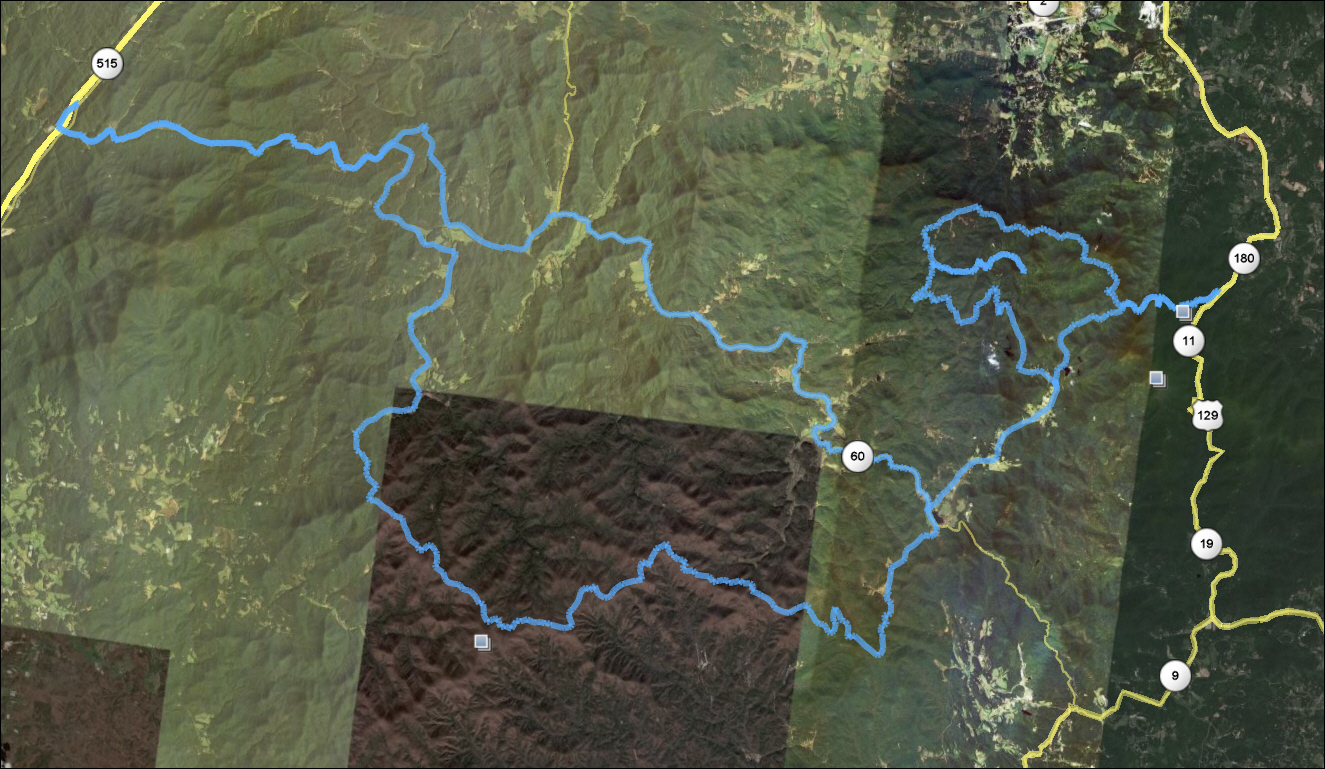