This little road trip started because I had to get out of the house because Bill was studying for his Phd. comps. I *had* to do something out of town.
Originally I wanted to do a solo trip up through the rural parts of Ga and end up at Two Wheels Only (T.W.O.) or the Airport Campground in Suches. I HATE I-75, and I wanted to spend as little time on it as possible.

Although I hate I-75, it has created a corridor of roads that NO ONE uses that go up through the state. I followed a path that put me in between all the major cities in GA. All I can say is...I have no pictures from the ride up and back, and WOW.
Wow, because I had no idea how unspoiled and rural some of those roads were!!! Wide open spaces with hardly any traffic. I think I saw 4 semis on the whole trip!! Fantastic stuff riding through the countryside!!!

I posted the following query on my local forum.

Bill has work to do next weekend, and he'll be hip deep and focused, so that means I've got to plan something out. I just put a fresh set of Pilot Roads on my ZZR1200.
I'm thinking of taking a little road trip up to..well..you all know where.
No trailer this time...all on the motorcycle.
I will take I-75 as far north as the Jennings exit and then take all back roads to Suches. Basically leave Friday morning, spend Friday night, Saturday night and come home on Sunday. I will stay at the High Valley Campground bunkhouses (if they have availability) for $45 a night and do a relaxing Sport Touring couple of days. Maybe chill at the top of Brasstown Bald. Maybe have some meals in the area. Any Sport Touring like minded folks wana go?
If you say yes...

Anyway, some local folks found out that I was going to do another "Lauren Quickie" and they joined in. It was originally going to be about 4 of us leaving from Orlando, but folks cancelled and it was Chris, his room mate Sid and I that were definite. Chris' girlfriend would be staying home instead of coming with him as she usually did on these kinds of trips. This would make the first time Chris would ride in the mountains without a passenger. Chris was also in "Retirement" and was using this trip to make a comeback into street riding. He was going to ride his Honda VFR800 and he was going to lend his room mate his track/around town Suzuki SV650, I was going to be on my Kawasaki ZZR1200. When Chris told me of his plan, I gave a sideways look and said "An SV650 with a ZZR1200 and VFR800?", to which he assured me everything would be fine. Having a 600cc unfaired bike with our Sport-Tourers wasn't the best idea. However, if Chris was going to vouch for Sid and the bike, it was good enough for me.

Our original plan was to take the Turnpike and I-75 to the Jennings FLA exit and then work the back roads up to T.W.O. I knew that for the first part of the trip, we would be rolling on the gas, making the high speed passes and working the traffic along the interstate. You folks know the drill: roll on the throttle, high speed, roll off - repeat. The ZZR1200, even loaded up is still fast and quick on the Interstate. The VFR800, with it's VTEC engine makes serious power at highway speeds. The SV? The SV is a V-twin and 650cc. Two pistons. The SV was doing *fine* until a few miles from the Jennings exit and just past our gas stop in Lake City. As I led our group onto the Interstate, I rolled on the gas and accelerated up to speed. The VFR800 was right behind me, but falling back. I could see the SV's headlight, but it was not getting up to speed. I slowed down, and merged to the right lane, while keeping an eye on my mirror. I went over an overpass and when I didn't see either bike come over the rise, I pulled over and waited. I figured maybe someone forgot to put a helmet strap on or something needed a momentary stop to adjust. After a minute or so, I started to make calls to Chris' cell phone. I couldn't just turn around, since the next exit on I-75 was about 10 miles up the road. It was better that I wait a few minutes and continue to call. If traffic started to get really thin coming over the rise, that would mean something horrible had happened and there was a major accident. I decided to wait a few more minutes until I *had* to make the trip up to the next exit and turn around. I thought to myself: I have seen underpowered bikes try and merge onto I-75 with scary results - when making a merge onto an interstate, there is no replacement for displacement!

I finally got a return call and Chris told me the news. The SV blew a piston or headgasket and died right there on I-75. I said I would go up to the next exit and come back to them.

When I got to their spot along I-75, Chris had this look on his face of utter dissapointment. He was coming out of retirement for this trip. All week he'd been so excited. The SV was "Game Over". If Sid was on any other bike, I think Chris would have made sure that everything was fine and settled with Sid, and then gone ahead with me. I guess those are the breaks when you ride with your room mate and your room mate is riding your bike! When Chris talked about the plan of how the SV was going to get home, there was a moment or two where I could see Chris wanted me to stay with them too. Then an awkward silence.

Three amigos, on a motorcycle trip. What do you do? We all know the rules of "Fight Club".

I could not go back to Orlando because Bill needed his time alone. All the bunkhouses were in my name. The above rules were clear when the trip was hatched.

Chris agreed to stay with Sid and get the SV back to Orlando. Chris' girlfriend's family lived near the exit, so he had resources to make getting the bike home a *relatively* easy things to do.

We hugged, laughed an uneasy laugh and the trip was back to being a solo one.

Heres' Sid (after taking off his leather jacket and gloves, etc.) on I-75 North bound. I don't know how (or why) the bike was turned around. Sid and Chris? Not so happy, but they know there will be another time. 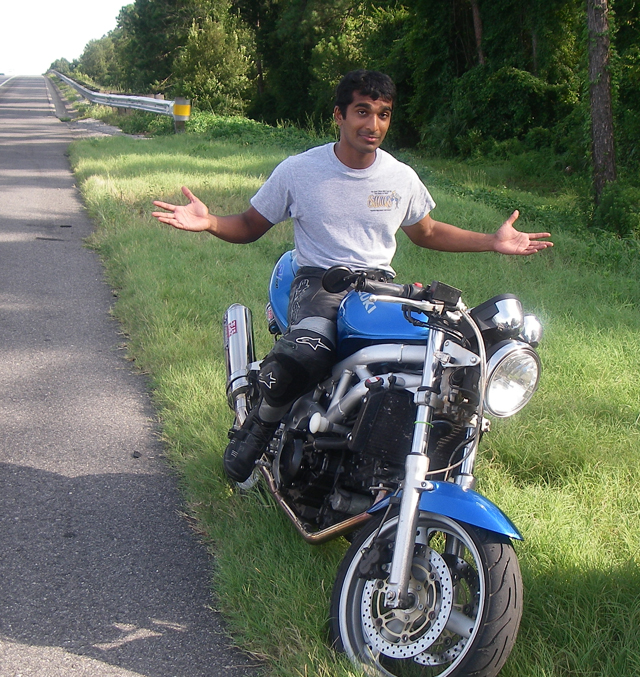 After leaving the guys on the side of the road, I contiuned with the plan. Making the Jennings exit and starting on the route, I was on totally unfamiliar roads. I was amazed at the lack of traffic. THERE WERE NO CARS or TRUCKS. Miles and miles of rolling hills and rustic scenes passed by. Cotton fields, Corn fields, old abandoned houses and barns. I was alone on my bike rolling through the countryside. I arrived into towns untouched by interstate traffic-flow-through. Sure, McDonalds and Buger King are there, but the crumbling quaint towns the interstate killed, added to the trip's fascination. Everyone is out on the Interstate. You can dissapear and ride off the grid. You can be Easy Rider. You don't have to be out west to get isolation; it still exits on the East Coast!

I have no pictures from along the way since I haven't gotten comfortable taking pictures from the bike while moving. I wanted to stop and take some pictures, but my schedule was way off. Maybe next time I can be "Easier Rider".

After a long day without an Interstate, I got to the bunkhouses in Suches. I took my shower, settled in, and then had dinner over at T.W.O.

Saturday morning, Kevin, a friend who went to school in Orlando and who moved back to North Georgia was going to meet us (well only me now) at T.W.O.

Saturday was an amazing cool morning in Suches. 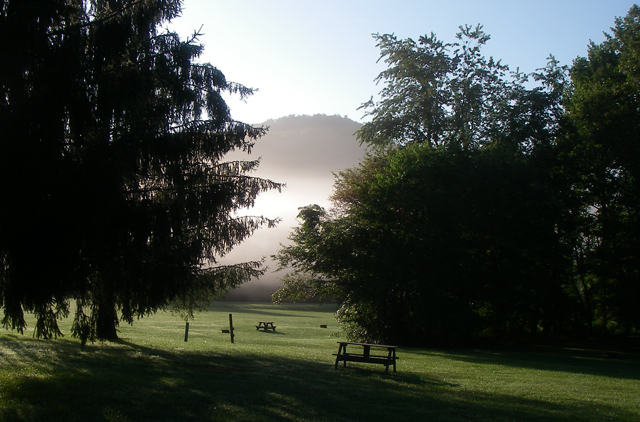 The ZZR1200 getting ready for the day 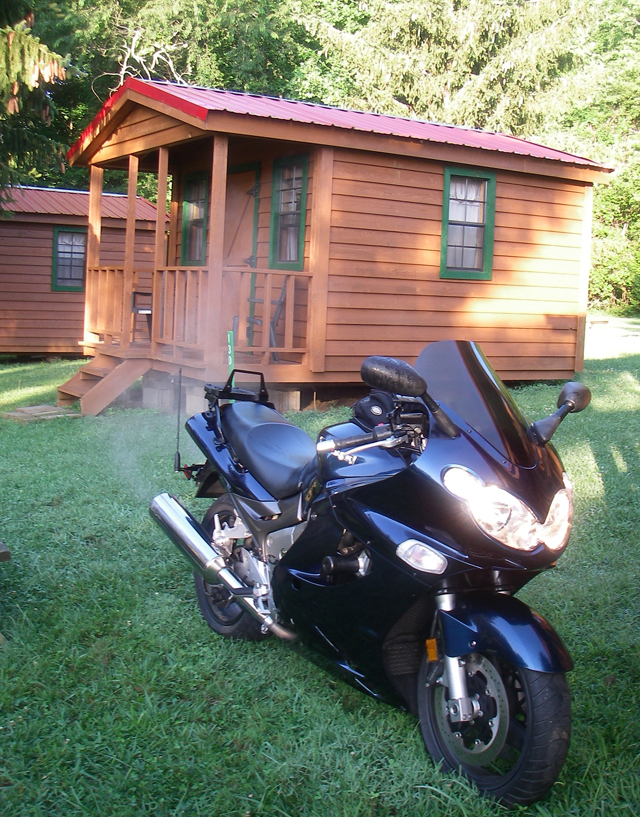 As I waited for Kevin after eating breakfast, I met a really nice couple. I talked to them for about an hour before Kevin showed up. I was thinking about riding with them for the rest of the day since they were going to be riding in the same general locations and routes that I might take. I was going to blow Kevin off if he showed up with his VFR/CBR fast friends. I wanted to ride an easy pace and I wasn't on one of my other bikes, which could keep up if that was what Kevin was planning.

Kevin showed up without his fastest friends and his route planned looked like it was going to be awesome! Sheesh, how shallow am I? I am only in it for the ride!!

No..not really shallow, it's just that I have to be selfish when it comes to rides, time off from work, and being alone in the mountains on a motorcycles. There is an equation that runs through my head concerning safety/fun/experiences.

Kevin with the cool couple I met. 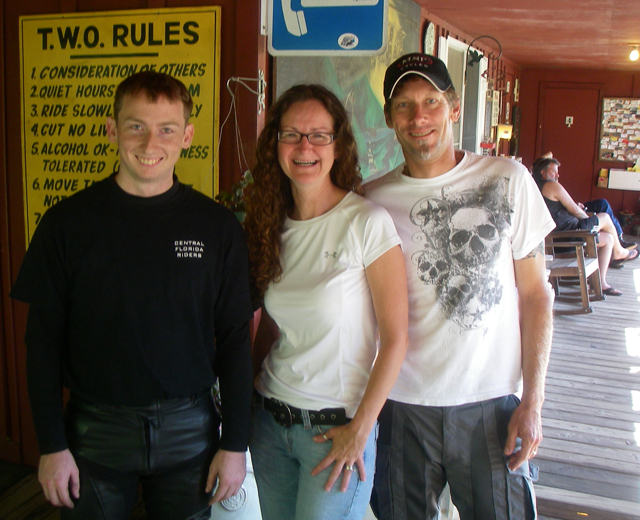 We headed back to the Bunkhouse so I could put my leathers on, and Kevin and his Dad and friends looked around the Airport Campground. 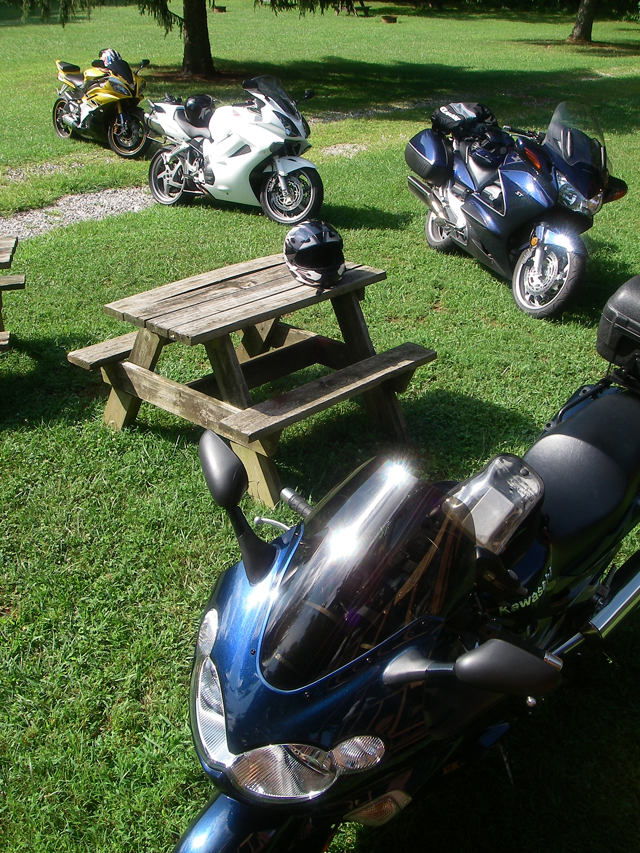 The route Kevin took us to the Cherohala was a way I had'nt gone before. The route was amazing! I will definitely do that again.

At one of our first stops. 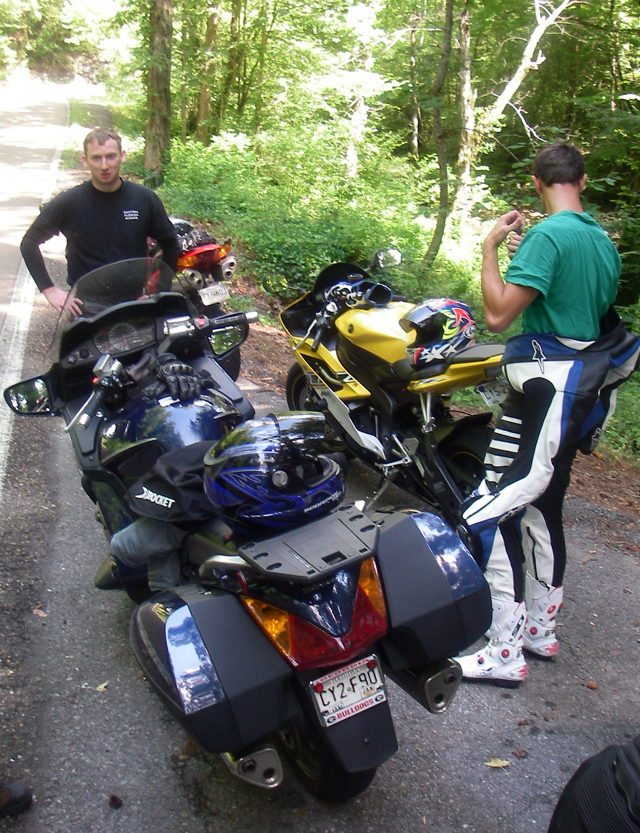 The wonderful streams that dot the landscape. 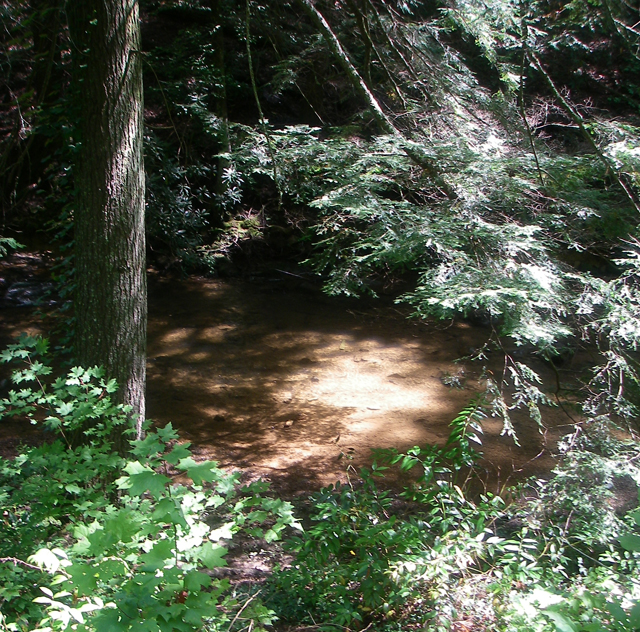 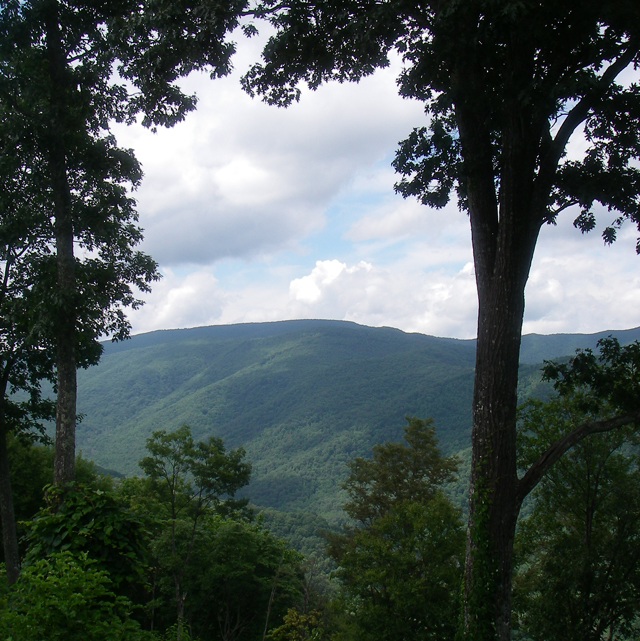 Resting along the way. 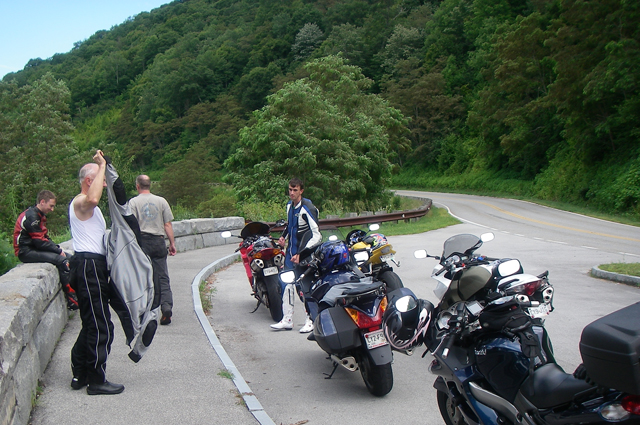 Kevin, his friend and his Dad. 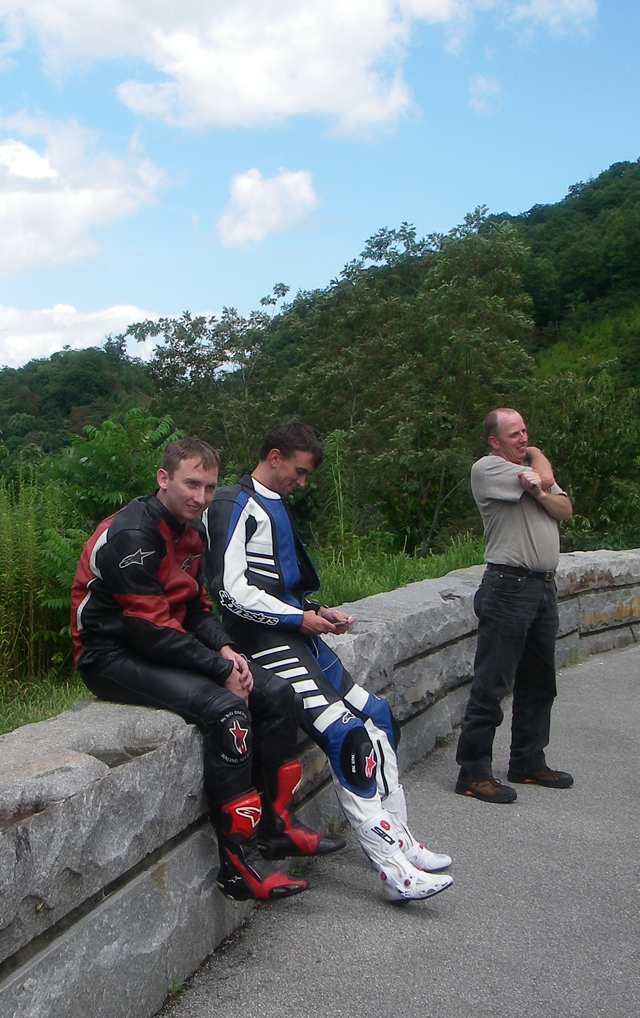 I love the mountains! 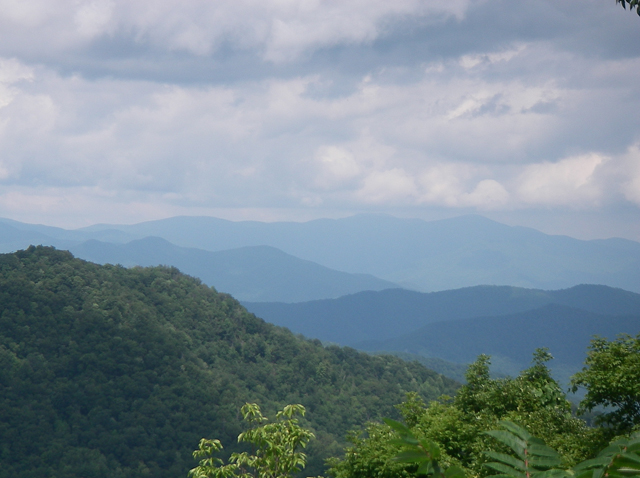 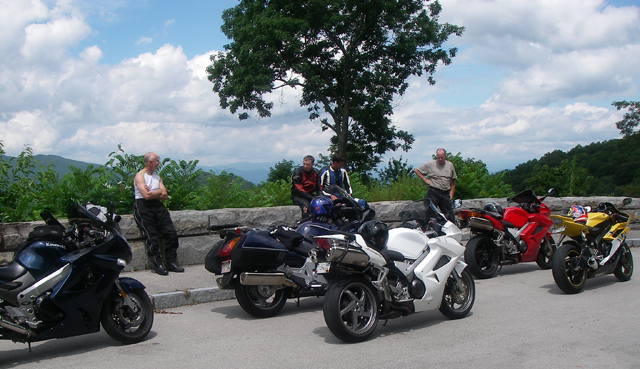 After a full day Saturday, Kevin and his Dad invited us all to a family cookout, but I knew that to go to Kevin's house after riding all day, eat and then ride back to my bunkhouse would be too much. When I voiced my concerns, Kevin's Dad said "Heck you can stay with us for the night, we'd love to have ya!" I declined but thought to myself, "Wow, I love the people I hang out with!".

We all rode together back the way we came, and I retrieved my spare keys that I forgot in the restaurant we had lunch at. I only knew I lost my spare keys because of the cool couple I had met that morning. It turned out they were doing the same route as us, and ended up arriving at the place we ate lunch at about 20 minutes after us. When we finished eating, we hung out and exchanged emails and such before leaving once again. When we stopped along the Cherohala, the cool couple came around a corner, I saw them, waived and they pulled in. They immediately told me about my keys. How cool is THAT!?!

After splitting off a ways down 60, Kevin and his posse waved to me and went their way. Once again, I was alone on my journey.

Back at my bunkhouse, I took a shower, got on the bike and had dinner at T.W.O.

Inside the Road house known as "T.W.O." 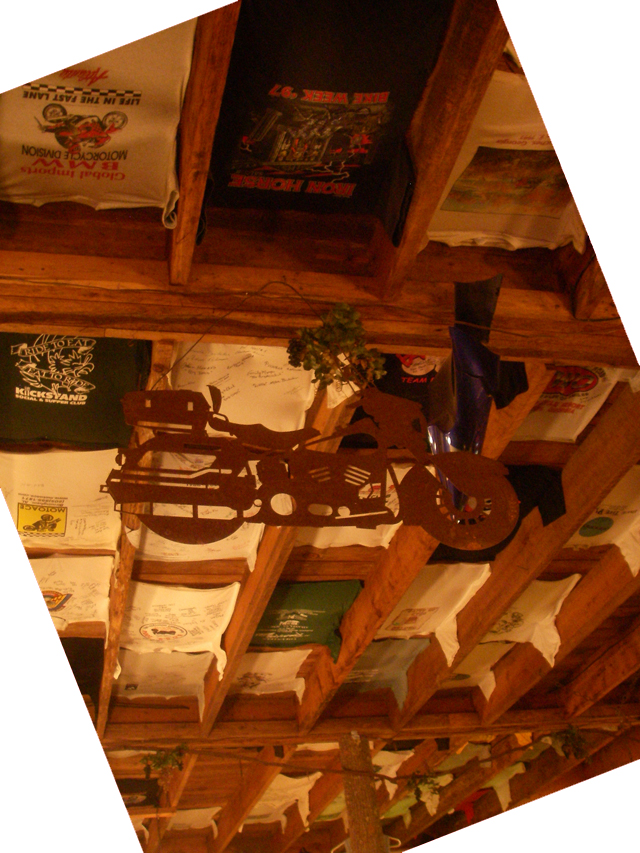 Sunday I woke up, gathered my things up and headed home. Because I had such a good time off I-75 I made a pledge to myself that I would stay off I-75 for the entire trip back.

Taking a slightly different route back, it took 12 hours and it rained almost the entire time.

In the end it was another awesome "Quickie" up to and back from the Georgia Mountains.